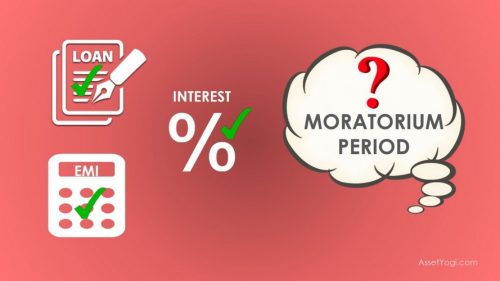 In an affidavit filed with the Supreme Court, the central government has depicted its support for waiving compound interest on loans up to INR 2 crores, known as small ticket loans. The government, via the affidavit, suggested that this relief would be made available to all borrowers. However, how this relief would be provided to the borrowers who have not opted for a moratorium has not yet been made clear.

The moratorium meaning in layperson’s terms is the prohibition of a certain activity. In the world of law, moratorium’s meaning suggests borrowers’ legal authority to delay or postpone their debt repayment. Initially, when the government had introduced a moratorium for businesses in March, which later was extended further, it had an additional interest rate associated with it.

Also Read: How Do The Latest Moratorium Policies Impact EMI Repayment for SMEs?

The Reserve Bank of India (RBI) previously declared a three-month moratorium alternative to offer relief to people and businesses under intense financial pressure owing to the lockdown to curtail the COVID-19 outbreak. The freeze required banks and financial institutions to delay EMI charges on both short-term loans and working capital advances. However, any postponement in payment of EMIs would have to be paid in the future at a higher interest rate.

In light of these steps taken by the government, individuals and businesses were urged to opt-out of the moratorium and pay their loans on time if they had funds in excess to avoid the payment of higher interest rates on their business loan. Financial institutions and banks were permitted to devise their own set of guidelines to enforce individual loans’ moratorium alternatives. The interest accrued over time can only be levied after the moratorium term expires. This was then supposed to turn the installments into higher EMIs, after the moratorium term, including an increase in the loan tenure.

However, the government has now come up with a plan to provide small business owners and individuals a relief on interests acquired due to the longer duration of the moratorium. The government has devised a plan to waive off interest on EMI moratorium and loan moratorium, causing banks and non-banking financial institutions (NBFCs) to develop novel moratorium interest calculation methods. Many financial institutions worldwide are planning to provide a moratorium calculator for interest rates on their websites. These moratorium calculators are expected to assist businesses and individuals to gauge the interest in their EMI moratorium and loan moratorium. This is also expected to assist business owners to accurately carry out moratorium interest calculations, and make necessary amends.

The Details in the Affidavit

The affidavit filed by the government does not make a clear distinction between borrowers who have opted for the moratorium partially or fully and the borrowers who have continued to pay their dues to date. The relief to the borrowers in terms of compound interest waiver for EMI moratorium and loan moratorium will be provided on specific loan categories. This waiving of interest rates will be applicable irrespective of whether a business has opted for a moratorium or not. The government has suggested that the compound interest for the following categories is expected to be waived off:

India’s government has shown its willingness to bear the cost incurred by waiving compound interest on EMI moratorium and loan moratorium, to support businesses in distress due to the COVID-19 pandemic. The proposal put forth by the government aims at assisting small businesses and individuals. If the Supreme Court approves this proposal, then the middle-class borrowers would rejoice in the decision, as it would help them immensely to cope with the repercussions of the COVID-19 pandemic.

That being said, there is no clear distinction between borrowers. Moreover, the government’s upsides of the affidavit filed pose a difficult hurdle for the credit discipline. Let us look at the affidavit in the following points, and try to gauge its meaning.

Also Read: How Covid-19 Has Impacted Indian Business And Economy

In the affidavit submitted to the Supreme Court, the government has suggested that it will waive interest rates on a moratorium loan of up to INR 2 crores. The government is doing so to assist small business owners who are the most affected by the COVID-19 pandemic. However, this limit of 2 crores is set to protect the country’s financial institutions instead of assisting small business owners. If the compound interest on all businesses, irrespective of their size, is lifted, then the banking institutions will have to let go of an estimated interest income of INR 6 trillion. To put it in a more relatable context, this would wipe out the entire net worth of India’s largest lender, State Bank of India (SBI).

The government has suggested that it wishes to support only the most adversely affected businesses. However, no two borrowers will be the same. An INR 2 crore worth of loans borrowed by a business owner will have a completely different profile than an INR 2 crore home loan borrower. Similarly, a borrower with a large credit outstanding has a completely different risk profile than an education loan borrower. The proposal put forth by the government tries to oversimplify the categories of borrowers and forcefully plugs them together, despite their varied profiles.

The most alarming fallout of the proposal is a miffed borrower who was disciplined not to opt for a moratorium or the one who was disciplined enough to pay their EMIs promptly. To make it clear, the government has decided to waive off the compound interest rate irrespective of whether the borrowers opted for the moratorium or not. This might not go well with the disciplined borrowers who have taken the efforts to repay their loans in the form of EMIs every month. As such, waivers of farm loans in the recent past have also caused the credit discipline to erode over time among such borrowers. The delinquency in farm loans has been increasing ever since, indicating a weak credit and finances culture.

The proposal put forth by the government mentions the beneficiaries of compound interest waivers, like banks. The primary intention, in this case, should be to protect the depositors’ funds. Hence, it is unclear whether the government is also thinking of subsidizing NBFCs across the nation. As such, microfinance loans have not been included in this category. This move is contradictory to the government’s statement that it wishes to support small business owners. Additionally, it will be extremely difficult to differentiate between the NBFCs and banks, since both have small businesses and retail borrowers.

The burden of compensating for the banks’ interest income will put the government under pressure, as many other pressing issues require attention. These include addressing the common person’s basic needs, addressing the COVID-19 pandemic’s direct costs, assisting people who have lost their livelihood, and making the healthcare infrastructure stronger across the nation. The proposal needs to be examined thoroughly to gauge whether the taxpayer’s money should be utilized to subsidize borrowers when all the taxpayers are in distress due to the COVID-19 pandemic.

The government has further suggested that the relief can be extended to borrowers who have not opted for a moratorium. This can be achieved by deducting a notional amount of compound interest from their total loan amount. This feature is expected to alleviate the borrowers who have been disciplined enough to pay their dues on time. Making a basic assumption that only 35% to 45% of the loans from NBFCs and banks will be eligible for the relief, the cost for the same would sum up to INR 5,000 to 7,000 crores. The government needs to make provisions for the same, to safeguard banks and protect the depositors. This total required sum considers that all borrowers will be provided relief irrespective of whether they have opted for a moratorium or not.

The proposal put forth by the government further suggests that the cost of the compound interest waivers will be borne solely by the government and not the lenders. Lenders are not expected to make provisions for this relief, as they would not be able to do so, as the burden resulting from the interest waivers will be too large to handle for banks and NBFCs. And if banks and NBFCs are to make provisions for such a huge burden, it will also adversely affect the depositors with them. This would go against the nation’s economic interests, and hence, the government has decided to step in and take care of this relief.

The proposal shared by the government with the Supreme Court explained that the compound interest waiver could not be provided for all loans. If the government decides to provide compound interest on all loans to all categories and classes of borrowers for a 6-month duration, the relief’s total cost would be unsurmountable. Hence, for now, only the distressed business sectors will be provided with a waiver on their loans.

Going ahead, individuals and businesses should ensure that they are prepared for any forthcoming obstacles or hurdles to their day-to-day business activity. An individual should not opt for a moratorium; this is because the waiver terms are still not clear, and it is better to be prepared in today’s uncertain times rather than waiting for the government to swoop in and support businesses.