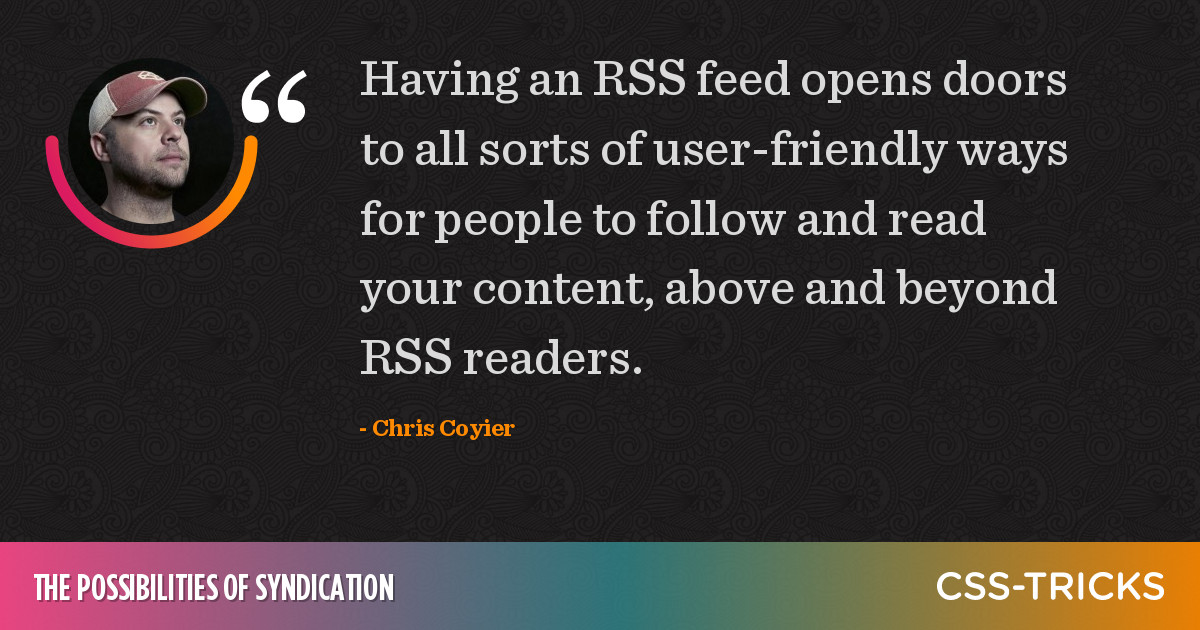 That’s the one word that isn’t an adjective in the acronym RSS.

RSS isn’t just about RSS readers. Even though, gosh if I don’t love RSS readers. It’s about putting content in a format that is designed to be portable. An API for content isn’t a metaphor, that’s literally what it is.

RSS is always on my mind, because it’s like my daily newspaper, but I’d wager it’s not exactly at the peak of people’s attention, even developers. It’s been getting a smidge of attention though, as Google is dipping it’s toes back into RSS with a “following” feature in Android Chrome. Publishers (like me) are always interested in ways we can help people read our stuff, and in this case, the way we help is by having an RSS feed. Sweet.

I also see apps that take advantage of it in unique ways. MonitoRSS is one of them. The whole point of it is kicking content over to Discord channels by — you guessed it — RSS feeds.

You can also build literal websites from aggregated content. For example, your WordPress site can suck in RSS feeds and re-display the content. I’m not 100% sure how it works but the Sidebar Webring is presumably powered by RSS as well. It’s just like CSS-Trickz. Alex could have used RSS to grab that content, it just so happens WordPress also has a JSON API which is often easier than parsing the XML of RSS. Dave and Robin have used Feedbin’s API to display posts that they read and “like” via RSS.

Having an RSS feed opens doors to all sorts of user-friendly ways for people to follow and read your content, above and beyond RSS readers.