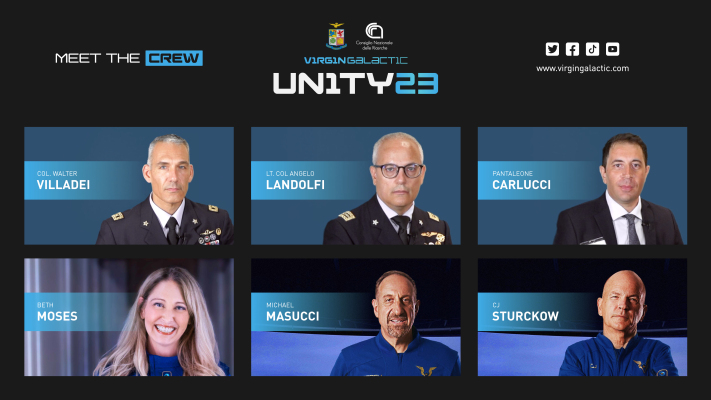 Just two months after celebrating its first manned launch to orbit – which is now under investigation with the Federal Aviation Administration – Virgin Galactic wants to return to space.

The company will be conducting its first commercial mission, the 23rd for the VSS Unity rocket-powered spaceplane, in late September or early October from the company’s sprawling Spaceport America facility. The flight will carry three crew members from the Italian Air Force and the National Research Council, each of whom paid an undisclosed amount for the seat. A Virgin Galactic staff member will also be on board.

The role of mission lead will be held by Walter Villadei, a Colonel with the Italian Air Force; Angelo Landolfi, a physician and Lieutenant Colonel; Pantaleone Carlucci, an aerospace engineer on behalf of the National Research Council; and Virgin Galactic’s chief astronaut instructor Beth Moses. Michael Masucci and CJ Sturckow will pilot the spaceplane.

The goal of the mission will be to evaluate the effects of the “transitional phase” from gravity to zero G on the human body; to that end, the crew members will be wearing sensors to measure physiological activity, and Villadei will even be wearing a smart suit that Virgin says will “[incorporate] Italian fashion style and technology.”

The announcement comes just one day after the FAA said that it was investigating the first crewed flight of VSS Unity in July. The news was first reported by The New Yorker and confirmed by the aerospace regulatory, who said that the spaceplane “deviated from its Air Traffic Control clearance as it returned to Spaceport America.” According to journalist Nicholas Schmidle’s reporting, a red warning light appeared on the dash of the Unity during flight, indicating that it had diverged from its planned trajectory.

Virgin Galactic later issued a statement disputing the piece, saying that “athough the flights ultimate trajectory deviated from our initial plan, it was a controlled and intentional flight path that allowed Unity 22 to successfully reach space and land safely at our Spaceport in New Mexico.”

“At no time were passengers and crew put in any danger as a result of this change in trajectory,” the company added.

This is not the first time Schmidle has uncovered news regarding the safety of Virgin Galactic’s supersonic operations. His book, Test Gods, also includes a previously unknown account of a 2019 test flight (confirmed in the book by former employees) which saw potentially serious issues with the plane’s wing.