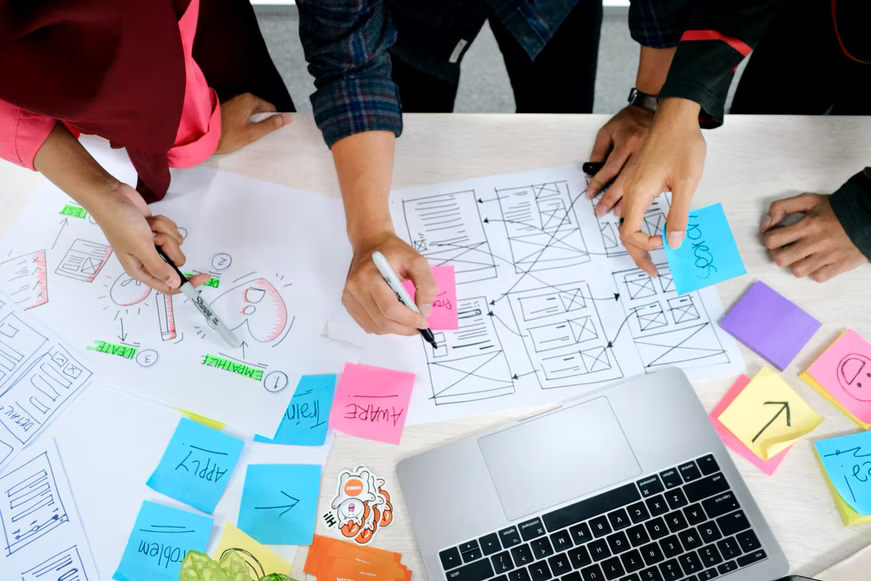 Well, they certainly sound like they’re all about the same thing.

When you design the user interface, surely what you are dealing with is user experience. Is it that simple? Or are there significant differences between the two? What consequences would such a difference have for design? Will there be any more questions in this paragraph? What do you think?

Let’s put both user experience and user interface under the microscope and see just what we’re dealing with.

The Key Difference Between User Experience and User Interface Design

There’s one key specific difference between the two forms of design. Let’s look at website design.

In this arena, UX takes in the entire user experience and uses this to design the website on the basis of feel. UI however looks at specific design elements, usually visual elements, and assesses how they direct user behavior on the site.

So, there we are. Wasn’t too tricky, was it? Thanks and goodnight.

Alright, then, you’ve got me. Nothing’s that simple. We need to dig into what we mean by the two terms before we know for sure what the difference boils down to.

Right, so User Experience design is about certain elements, but chief among these is that it is an approach that emphasizes how human users comprehend the user environment they’re put in. For instance, with contact centre call recording systems, the designer will be interested in the user state during each of the component tasks, from initial recording to playback and analysis.

It’s all about what happens to the user and how the user is made to feel when they are given a product to manipulate.

Here’s a word from somebody who knew a thing or two about UX design.

‘You’ve got to start with the customer experience and work back toward the technology. Not the other way around’

What’s interesting here is what the turtlenecked tycoon doesn’t say. He doesn’t even mention the need for the product or the problem it’s trying to solve. For him, the key ingredient in design is how it impacts on customer experience. This is why his products are so enjoyable to use.

Sure, the iPod solved a problem. It meant no more jiggling around between CDs (or even cassettes) while on the move. But the key impact that it had was born of the fact that it was a joy to use. From opening the packaging to using the earbuds, it was such a cool experience.

UX design may be closely linked with technology, for instance working to prioritize landing page speed because of the effect it has on the user. But it’s not limited to the technology sector.

Any product or service that a user has a relationship with can be shaped with the principles of UX design in place. It just so happens that it’s the arena of technology in which UX design has really taken off. This is because of two things:

What does a UX Designer Do?

The UX designer will factor several elements into their thinking. Remember, they’re concerned with how the product or environment or process or whatever it is being designed will impact on the user.

For this to succeed, they often break down operations into task analyses. How easy is it, for example, to access the royalty free music youtube artist of a user’s choice? Can we make it a little easier?

A UX designer will effectively act as the mortar at the center of the product team. This is because the feel of a product is key to its success.

For this reason, then, a UX designer will interact with product developers to give them feedback on how their product is succeeding or otherwise. A UX designer will be part of the design process from the very first wireframing stage, through prototypes, testing, and iteration, to the finished product.

UX designers will also interact with marketers to make sure that the product and its promotion are of the same voice.

But a UX designer’s job doesn’t end there. They also are involved in data analysis regarding competitors (How do the competition’s products feel?), and customers (do we have a good idea of who our customers are and what they want?)

They will then also be involved in assessing usage data once the product is out there. It’s often down to the UX designer to improve upon the product’s usability or to jettison it in favor of the next step.

We’ll finish on UX design with this nice quote.

‘User Experience Design is the science and art of designing a product so that it’s easy to use, fits expectations, and meets business goals.’

UI is actually an older discipline than UX, but it can be trickier to define, due to the misinterpretations that have cropped up over the years. Here’s one immutable factor: UI is just about digital products. Its only valid usage is in the sphere of interaction between user and technology.

UI design is all about looking at the device or system and making all the processes that affect the user as straightforward as possible. This means, in particular, an emphasis on optics. So, for a website, UI design will look closely at the fonts, colors, and icons used, as well as the spacing and overall layout on the screen. It will seek to make the important information as prominent as possible.

The key aim of UI design is to enable the user to get where they want to go without having to think too much. If they have to claw their way through a process while referring to instructions galore, then the UI design has failed.

What Does a UI Designer Do?

A UI designer will perform a lot of the functions that are covered by a UX designer, in terms of product inception and development, but will come at it from a predominantly visual perspective. So the UI designer will have a solid grasp of color theory and the effects on the user of certain forms of typography and design patterns.

They will also be adept at utilizing the potential of different devices with different screen sizes. For instance, they will be very aware that online call conference solutions need to demonstrate good visual design on phones as much as on big screens. This need to make visuals work on all screens is emphasized by the rise in mobile website access.

While we’re on websites, it’s quite often the case that UI designers will have an extremely influential role over the eventual look of the whole site, and are in fact seen in some quarters as in the process of taking over the traditional web developer role.

Or, to focus on databases for a second, a UI designer will want to see to it that what can be an off puttingly data-heavy area, will benefit from great visuals so that users aren’t put off. Consequently, Elasticsearch Documentation, for instance, will be as friendly-looking as a UI designer can manage.

Here’s the thing about the difference between user experience and user interface. They may be different, but that doesn’t mean you don’t want to use both. Far from it. It’s in a combination of the two that really exciting user-centered design takes place. Whatever your output, whether a smartwatch or a killer means of meltdown and spectre testing, it will benefit from a blend of UI and UX.

Let’s consider an app that gives you suggestions on what to cook for dinner.

It may be fantastic at factoring in what ingredients you have and coming up with something delicious for you to put together from them. It may be super-quick at doing it too. It may even help you by putting in grocery orders where necessary. But if its colors clash and its font fail to stand out, then its design is lacking.

In short, it has good UX design, but terrible UI design.

It’s easy to conceive of the converse. Let’s say your business provides a hosted VoIP solution. The phones look amazing. But they’re impossible to use. That’s a great UI and awful UX.

So, a blend of both is what’s required.

You should now be clear on the difference between UX and UI. If not, try this analogy:

In other words, UX is all about the way the product feels to used in its intended setting. How easy is it to eat cereal with a spoon? UI is more about how the product comes across in the first place. How much do you want to use the spoon to eat the cereal?

Put like this, it’s easy to see how co-dependent these pursuits are. If you’re going after one and not the other, you need to re-think your approach. So, wake up and eat the cornflakes.