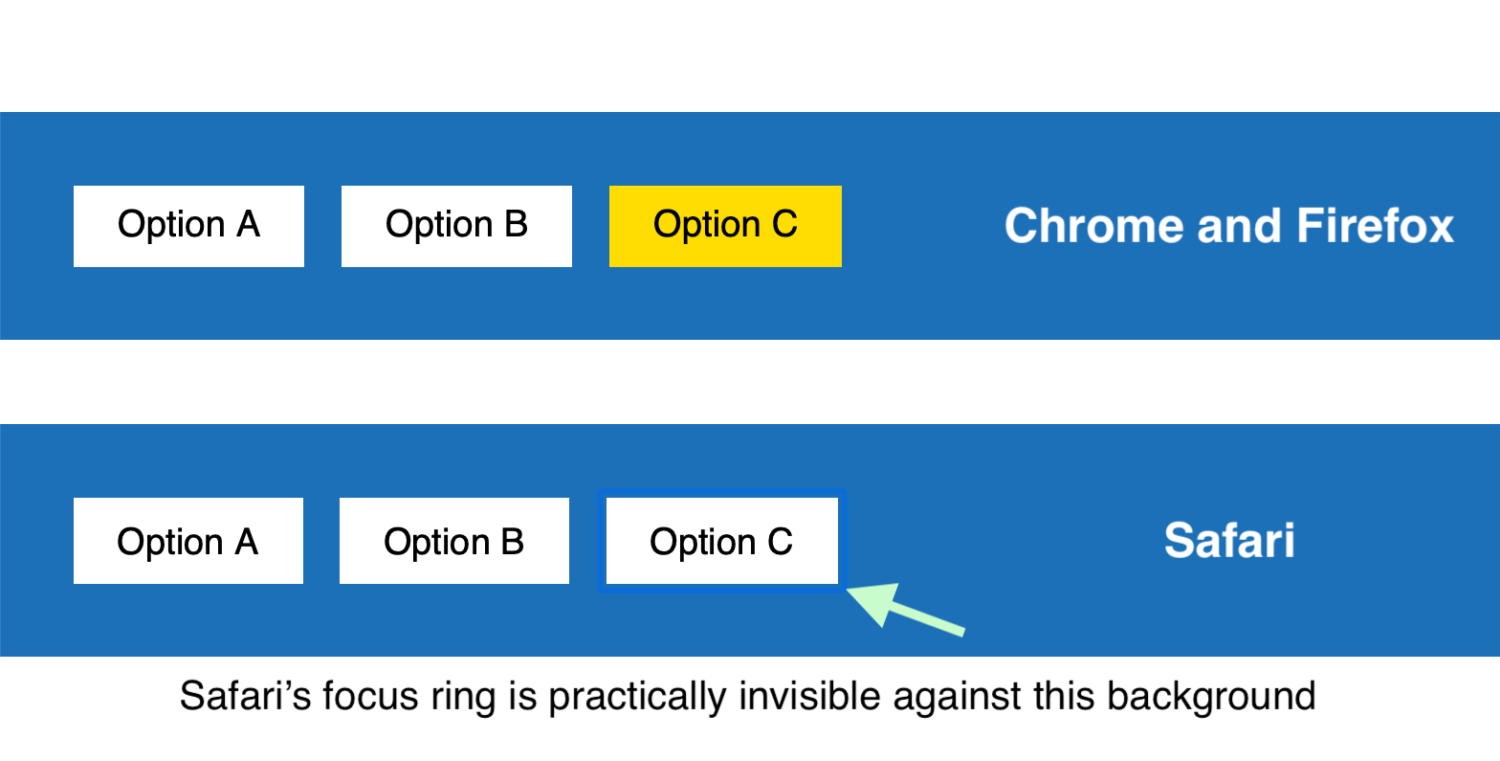 There’s a whole lot of accessibility in this week’s news, from the nuances of using :focus-visible and input placeholders, to accessible typefaces and a Safari bug with :display: contents. Plus, a snippet for a bare-bones web component that supports style encapsulation.

Now may be a good time to start using :focus-visible

The CSS :focus-visible pseudo-class replaces :focus as the new way to create custom focus indicators for keyboard users. Chrome recently switched from :focus to :focus-visible in the user agent stylesheet and, as a result of that change, the default focus ring is no longer shown when the user clicks or taps a button.

When switching from :focus to :focus-visible, consider backwards compatibility. Your keyboard focus indicators should be clearly visible in all browsers, not just the ones that support :focus-visible. If you only style :focus-visible, non-supporting browsers will show the default focus ring which, depending on your design, “may not be sufficiently clear or visible at all.”

The BBC created their own custom typeface called Reith (named after the BBC’s founder Sir John Reith). Their goal was to create a font that supports multiple languages and is easier to read, especially on small devices. The font was tested with mixed-ability user groups (dyslexia and vision impairment) and across different screen sizes.

We [the BBC] were using Helvetica or Arial. We also had Gill Sans as the corporate typeface. These typefaces were designed a hundred years ago for the printed page [and] don’t perform well on today’s modern digital screens.

Note: If you’d like to inspect Reith Sans and Reith Serif in Wakamai Fondue, you can quickly access the URLs of the WOFF2 files in the “All fonts on page” section of the Fonts pane in Firefox’s DOM inspector on BBC’s website.

display: contents is still not accessible in Safari

The CSS display: contents value has been supported in browsers since 2018. An element with this value “does not generate any boxes” and is effectively replaced by its children. This is especially useful in flex and grid layouts, where the contents value can be used to “promote” more deeply nested elements to flex/grid items while retaining a semantic document structure.

Unfortunately, this feature originally shipped with an implementation bug that removed the element from the browser’s accessibility tree. For example, applying display: contents to a <ul> element resulted in that element no longer mentioned by screen readers. Since then, this bug has been fixed in Firefox and Chrome (in the latest version).

In Chrome and Firefox, the screen reader informs the user that the “Main, navigation” contains a “list, 2 items.” In Safari, the latter part is missing because the <ul> and <li> elements are not present in the accessibility tree. Until Apple fixes this bug in Safari, be careful when using the contents value on semantic elements and test in screen readers to confirm that your pages are accessible in Safari as well.

Set opacity when overriding the color of placeholder text

Accessibility experts recommend avoiding placeholders if possible because they can be confused for pre-populated text and disappear when the user starts entering a value. However, many websites (including Wikipedia and GOV.UK) use placeholders in simple web forms that contain only a single input field, such as a search field.

Placeholders can be styled via the widely supported ::placeholder pseudo-element. If your design calls for a custom color for placeholder text, make sure to specify both color and opacity. The latter is needed for Firefox, which applies opacity: 0.54 to ::placeholder by default. If you don’t override this value, your placeholder text may have insufficient contrast in Firefox.

One of the key features of shadow DOM is style encapsulation, wherein the outer page’s style rules don’t match elements inside the shadow tree, and vice versa. In order to use this feature, you need to attach a shadow DOM tree to an element (usually a custom element, like <my-element>) and copy the element’s template (usually from a <template> element in the DOM) to the element’s newly created shadow DOM.

These steps can only be performed in JavaScript. If you’re only interested in style encapsulation and don’t need any dynamic functionality for your element, here is the minimum amount of JavaScript required to create a custom element with a shadow DOM:

For an example of style encapsulation, see Miriam Suzanne’s <media-object> element on CodePen. The scoped styles are located in the <template> element in the HTML pane. Notice how this CSS code can use simple selectors, such as article, that only match elements inside <media-object>’s shadow DOM.

JavaScript may soon no longer be required to create this type of style encapsulation in modern browsers. Earlier this week, Chrome became the first browser to ship Google’s Declarative Shadow DOM proposal. If it becomes a standard, this feature will also make it possible to use Shadow DOM in combination with server-side rendering.