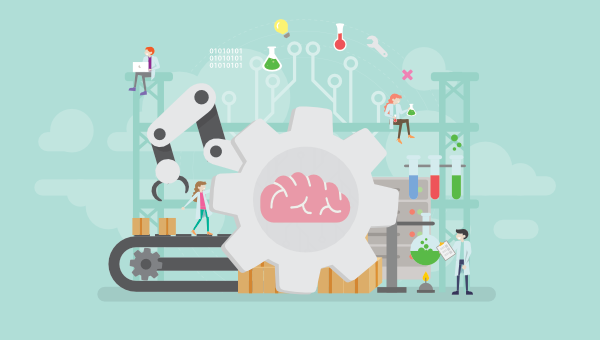 In the past decade, machine learning has moved from scientific research labs into everyday web and mobile apps. Machine learning enables your applications to perform tasks that were previously very difficult to program, such as detecting objects and faces in images, detecting spam and hate speech, and generating smart replies for emails and messaging apps.

But performing machine learning is fundamentally different from classic programming. In this article, you’ll learn the basics of machine learning and will create a basic model that can predict the species of flowers based on their measurements.

How Does Machine Learning Work?

Classic programming relies on well-defined problems that can be broken down into distinct classes, functions, and if–else commands. Machine learning, on the other hand, relies on developing its behavior based on experience. Instead of providing machine learning models with rules, you train them through examples.

There are different categories of machine learning algorithms, each of which can solve specific problems.

Supervised learning is suitable for problems where you want to go from input data to outcomes. The common trait of all supervised learning problems is that there’s a ground truth against which you can test your model, such as labeled images or historical sales data.

Reinforcement learning is a branch of machine learning in which an intelligent agent tries to achieve a goal by interacting with its environment. Reinforcement learning involves actions, states, and rewards. An untrained RL agent starts by randomly taking actions. Each action changes the state of the environment. If the agent finds itself in the desired state, it receives a reward. The agent tries to find sequences of actions and states that produce the most rewards.

Reinforcement learning is used in recommendation systems, robotics, and game-playing bots such as Google’s AlphaGo and AlphaStar.

Setting Up the Python Environment

In this post, we’ll focus on supervised learning, because it’s the most popular branch of machine learning and its results are easier to evaluate. We will be using Python, because it has many features and libraries that support machine learning applications. But the general concepts can be applied to any programming language that has similar libraries.

(In case you’re new to Python, freeCodeCamp has a great crash course that will get you started with the basics.)

macOS and Linux come with Python preinstalled. To install the Scikit-learn library, type the following command in a terminal window:

On Microsoft Windows, you must install Python first. You can get the installer of the latest version of Python 3 for Windows from the official website. After installing Python, type the following command in a command-line window:

Alternatively, you can install the Anaconda framework, which includes an independent installation of Python 3 along with Scikit-learn and many other libraries used for data science and machine learning, such as Numpy, Scipy, and Matplotlib. You can find the installation instruction of the free Individual Edition of Anaconda on its official website.

In our case, we want to create a model that predicts the species of a flower based on the measurements of the petal and sepal length and width.

This is a supervised classification problem. We’ll need to gather a list of measurements of different specimens of flowers and their corresponding species. Then we’ll use this data to train and test a machine learning model that can map measurements to species.

Continue reading A Primer on Machine Learning with Python on SitePoint.