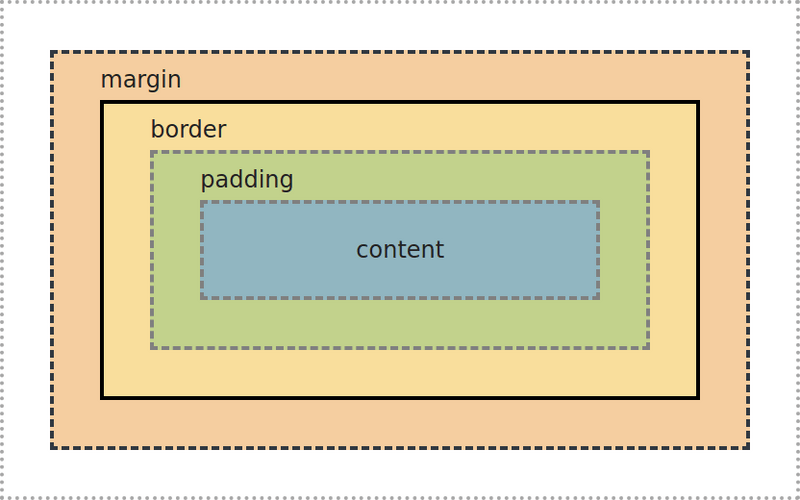 CSS can be hard to grasp when you’re starting out. It can seem like magic wizardry and you can very easily find yourself playing whack-a-mole adjusting one property only to have something else break. It is frustrating, and that was my experience for quite a long time before things suddenly seemed to “click”.

Reflecting back on this time, I think there are a few key concepts that were vital to things finally all making sense and fitting together. These were:

There are also some useful concepts to keep in mind when building reusable and composable components.

Everything is a Rectangle

A key way I think about building visual UI components is that basically everything can be broken down into a bunch of rectangles on a page. It can be overwhelming to consider all aspects of a page at once, so break things down mentally into a series of rectangular components and ignore everything that doesn’t matter for the piece that you’re working on at that point.

When you consider the size of an element (i.e. its height and width), there are two different models by which to measure this and you can adjust this with the box-sizing property.

The size of an element only includes its content, and not its padding or border.

The size of an element is inclusive of its padding and border. When you set width: 100% with content-box, the content will be 100% of the width of the parent element, but any borders and padding will make the element even wider.

border-box makes a lot more sense, and I find it much easier to reason about. To apply border-box to all elements on the page, make sure you have something like this snippet in your stylesheet (a lot of CSS resets will include this anyway):

Going forward, I’m only going to be considering border-box, as it’s our preferred box model at Kablamo.

Elements are usually laid out in the document in the order that they appear in the markup. The display property controls how an element and/or its children are laid out. You can read about display in more detail at MDN.

The position property affects how elements are positioned with respect to the flow of the document in combination with positioning properties (top, left, right, bottom, inset).

The visual aspect of reusable and composable components should ideally be self-contained. Outer margins are generally a bad idea. Margin collapse on outer borders means component layout is more complicated to reason about and the effective boundary is not the same as the visual boundary (such as a border). This can mean that components behave less predictably and you can no longer think of them as just a rectangle.

Essentially, you want to make your components easy to just include in an application without worrying if they break outside of their simple rectangle.

Overall, I think these are most of the guiding principles that I wish I understood a lot sooner than I actually did. I spent a lot of time fumbling around, tweaking CSS back and forth, and not really understanding why things weren’t behaving as expected.