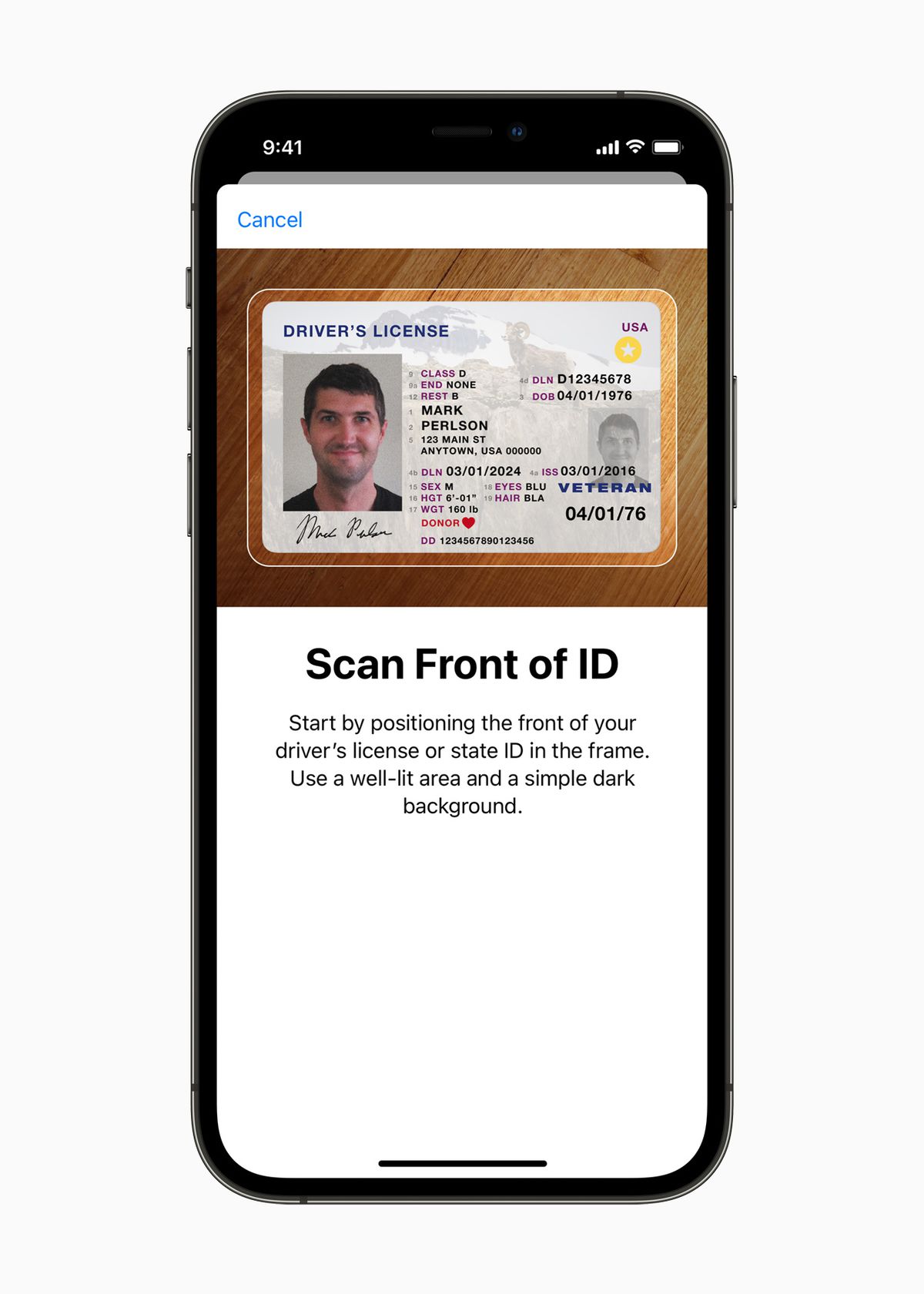 Driver’s licenses stored on our phones are not too far down the road.

Residents of Arizona and Georgia will soon be able to use their iPhones and Apple Watches as digital driver’s licenses or ID cards. People living in Kentucky, Maryland, Oklahoma, Iowa, Utah, and Connecticut will get the feature next. Meanwhile, the Transportation Security Administration (TSA) is going to designate lanes at specific airports to start processing these new digital IDs in order to clear people to travel.

When residents add their state ID to their Wallet, Apple explained in a Wednesday press release, they’ll have to send a picture of their card and a photo of their faces, and they’ll also have to “complete a series of facial and head movements during the setup process.” It’s then up to the states to verify the ID before people can use them. In effect, this system appears to be a new form of government-supported biometric ID verification that goes beyond a regular photo in a process that potentially provides new data to state governments as well as to Apple.

At the new TSA lanes, for example, Apple users will be able to tap their iPhones or Apple Watches to an identity reader. They will then be shown the information being requested by the TSA and authorize their devices to send that data to the TSA by using Face ID or Touch ID. This, Apple says, “ensures that just the required information is shared and only the person who added the driver’s license or state ID to the device can present it.” The company added, “Users do not need to unlock, show, or hand over their device to present their ID.”

Apple is not not the only one rolling out digital driver’s licenses in the United States. New York State is working with IBM on the possibility of expanding its Excelsior Pass vaccine passport system to include driver’s licenses, according to a New York Times report. The federal government is also on board with the concept. In April, the Department of Homeland Security (DHS) said it was looking for input on upcoming rules for mobile digital driver’s licenses.

But are digital IDs a good thing? From a privacy and security perspective, it’s unclear — but they also seem to be inevitable.

The pandemic has helped some people get more comfortable with storing personal information on their phones, which might explain why states and tech companies are forging ahead with the idea of digital driver’s licenses. These efforts are flanked by an ongoing and highly polarizing debate over digital vaccine passports, which provide people with an easy way to prove they’ve been inoculated so that they can do things like board a plane or go to a concert. Several states, including Florida and Texas, have banned or restricted vaccine passports, which suggests that some Americans still are not comfortable storing certain highly personal information on their phones.

detailed report raising issues about a digital state ID system, including concerns about police access to users’ phones, privacy, and surveillance risks, and the possibility that people will one day be coerced into downloading government apps. The Surveillance Technology Oversight Project also obtained a contract revealing that the state of New York has bigger plans for its Excelsior Pass than it initially disclosed, which could reveal the risks of similar digital ID programs.

“It’s hard to trust the claim from officials that these apps are only going to do X or Y,” Albert Fox Cahn, an attorney at the Surveillance Technology Oversight Project, warned in June, pointing to the potential expansion of the Excelsior Pass. “We see this clear pattern of them being installed for one purpose and then expanded for another.”

Completely digital wallets are just around the corner

The arrival of digital IDs shows how tech companies increasingly want to be involved in all the things you do with your physical wallet. Both iPhone and Android users can already store credit cards, plane tickets, and event tickets in digital wallets. Now, with the impending introduction of digital driver’s licenses, Apple is getting closer to making your physical wallet completely obsolete.

“To be fully free of your physical ID, there’s one more thing we need to bring to iPhone, and that’s your ID. So we’re bringing identity cards to Apple Wallet,” said Apple Vice President Jennifer Bailey at the company’s developer conference on June 7. “It’s that easy! Your ID information is now in Wallet.”

The federal government appears to support the idea. While the DHS is establishing new standards for the technology that powers digital IDs, the TSA is already working with Apple to accept a version of an iPhone-based digital ID that can be used in airports. Several states had previously laid the groundwork and rolling out digital driver’s licenses that could work with Apple Wallet (states are generally responsible for issuing ID cards in the US). In a statement on Wednesday, Bailey said that Apple was in communication with other states and that the company was “working to offer this nationwide in the future.”

Apple isn’t the first or only major tech company trying to bring digital IDs to smartphones. Google has also been working on a system for a digital driver’s license, and last fall, the company detailed new privacy and security standards for developers to handle identity documents on mobile devices. IBM has also been researching digital driver’s licenses and expressed enthusiasm for how they might rely on blockchain technology.

A French security company called Idemia has already launched digital IDs in partnership with several US states, including Arizona and Oklahoma. The company argues that digital IDs make it easier to quickly authenticate someone’s identity, while also allowing a person to share less of their personal information. With an app, for instance, users can opt to just share their age with someone verifying that someone is old enough to buy alcohol without also sharing their address, Idemia explains on its website.

The technology behind digital IDs is inevitably not dissimilar to the tech behind vaccine passports. Opponents to vaccine passports, however, have argued that requiring detailed health information to enter businesses and other public areas hurts people’s privacy and liberty. Nevertheless, some states that have banned vaccine passports are charging ahead with digital driver’s licenses.

In any case, it’s clear that residents of several states will soon be able to store their driver’s license on their phone. What remains unclear is whether we’re headed for a country where there are 50 different digital driver’s licenses and 50 different opportunities for issues and problems.

Update, September 1, 2021: This piece has been updated with new information about how Apple’s digital state ID would work, including which states would use the system first.